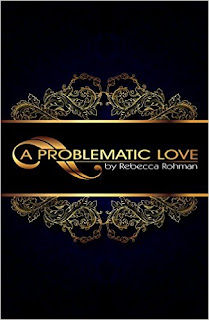 Eight years after her fiancé was murdered, attorney Megan Kole has fully reconciled two areas of her life: her intelligent son, who never knew his father, and the thriving law practice that is her late father's legacy. The remainder of Megan's world stalled in a paralyzing grief that she effectively compartmentalized until a transfer to Seattle brings a handsome, mysterious billionaire into her life.

Daemon Ros has been an outcast since the day he was born. His parents’ lavish but emotionally-vacant lifestyle prompted him to assert his financial independence at a young age. His ailing brother is the only connection he allows to penetrate the vault he has built around his heart, until a devoted mom and her precocious son introduce him to the true meaning of family bonds.

But a chance legal encounter where Megan acts as mediator in a Ros family business dispute leads to far more than either expected. When a shocking truth leads to a love affair between Megan and Daemon that is forbidden in every conceivable way, the barely-restrained chemistry that scorches between them threatens an injunction on everything and everyone they hold dear. As pasts cross, memories threaten, and lies surface in a trial far more deadly than anything inside a courtroom, an arbitration of the heart could prove the only way for them both to make it out alive.

He’s speaking German, so I can’t understand a word of what he says. The flat screen TV on the wall ahead of him is on and it appears to be on the local news. If I’m going to frequent this place, I suppose I should learn at least one of the many languages spoken here at some point.

As he talks on the phone, with his open palm, he lightly caresses my breast. I welcome his touch and gaze into his eyes as I reach between his thighs and start a gentle stroke, running my fingertips over his crotch. He’s wearing only sweats. He smiles at me, still talking, but when I start kissing his neck, he slithers his hand between my thighs and through the lace of my panties, he glides his thumb over my clit.

My breaths become long, and when he pulls my crotch to the side and sinks his fingers inside me, I can’t resist. I trail my kisses from his neck and capture his lips. He responds, kissing me through his words. He turns away, quickly says something and drops the phone to the floor before he slides his hand along my jaw and devours my lips.

I turn my body to face him directly, spanning his thighs while still sitting in his chair. He cups my face and brings my lips to join his. While our tongues are in a voracious exchange, he bores his fingers into my ass and presses my body onto his steely erection.

“We have complete privacy. She won’t interrupt,” he says, recapturing my lips. While we kiss, I sway my core over his firm arousal and my thighs become increasingly wet from the liquid that escapes me. I reach between his sweats and underwear, pulling his length above the waistline of his pants and begin a slow but ever- increasing caress of his protrusive endowment.

I miss him, in every way that matters. With the distance between us over the last few weeks, I feel compelled to show him how much. I want to please him and express to him in any and every way imaginable how much he means to me—how much I love him.

As I continue to stroke him, he gently moves my hand to the side, then he holds onto the crotch of my panties and with one violent tug, I hear the fabric tearing away from my body. He grabs the hem of his T-shirt and raises it over my head.

I am now free. There is nothing left between us but a few locks of my hair. He guides my hips over his shaft and we both watch as my saturated lips glide over his full length.

His breaths become labored and long; his grip on me tightens as I move over him. He folds me in his arms and as we ardently kiss, I feel his erection pressing hard against my clit.

Slowly, I pull away, and when my feet hit the floor, I begin to rise. Daemon tries to follow, but with my index finger, I push him back into his seat. I grab the waistline of both his pants and underwear. He raises his hips as I pull them away from his body and drop them in a pile between his legs.

He smiles at me as he watches my every move. I kiss his lips then his neck. I ensure my nipples graze down his muscular, trimmed stomach as I work my way down, stopping to kiss his belly button and the scar on his stomach.

He sensually roams his palms all over my body. Leaning forward, he buries his fingers into the flesh of my ass.

It’s a pleasure to see him groomed and in all his glory up close. I kneel between his thighs, push his legs wide apart, and tenderly kiss his scrotum. I run my tongue from his base up to his crown and gently stroke him repeatedly. I circle my tongue around his head, and he lets out a pleasurable sigh as I concentrate on the back side of his tip.

I circle his thickness in my palm and continue to lick and suck him. I tighten my hand around his shaft, moving up and down his full length. When I surround him and take his entire length down my throat, he lets out a gratifying gasp as I repeatedly move in and out of him.

He sinks all his fingers into my hair, moving his hips into me. I continuously suck and swallow him.

“Yes, Megan, fuck yes,” he mumbles repeatedly as I take him between my lips. “You’re in-fucking-credible.” He says as I suck him hard while gazing intently at him.

He leans over, clasping my head between his palms, urging me to my feet. He holds my hand, leading the way to the oversized leather chair and ottoman in the corner of the room then directs me to sit.

He places each of my thighs over the arms of the chair and sits on the ottoman. I am so eager. I know what’s coming. I inch my hips forward, awaiting his tongue and lips.

He kisses me then buries his head between my breasts and circles my nipples between his lips. He runs his tongue down to my belly button and kisses me gently while fondling between my thighs. He inches closer to my center and runs his tongue around me, before he softly kisses my clit.

What initially starts as a gentle assault grows into a violent and hungry onslaught over and around my center. He slips two fingers inside me, moving them in and out as he laps my oversized clit. I move in synchronicity with his tongue and lips. As he gets me ever so closer to my release a burst of pleasure exits my lips.

He pulls away and sits on the ottoman. I rise to my feet and lower my body over his monumental erection. He holds my hips, guiding me as I insistently move my ass. He then circles one arm around me and buries his other palm in my hair. He gazes at me for a moment. His stare feels so loaded, penetrating. He leans his forehead against mine then softly kisses me.

We tighten our hold as we move together as one. Soon, he folds me in his arms. We make our way down to the rug. He pins my body in place, pummeling his sweet parts inside me. As the pleasure mounts, his groans tighten and his breaths vigorously increase. I forcefully work my clit. As I rise to a crescendo, his labored breaths join mine. I come to an explosive release. Seconds later, he shouts my name then kisses my lips as he spasms into release.

He gradually stops moving inside me, but still he gazes into my eyes. 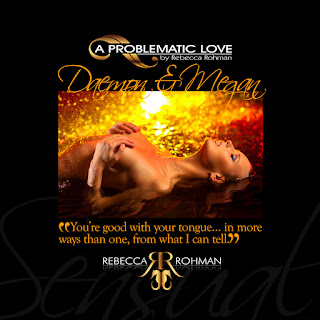 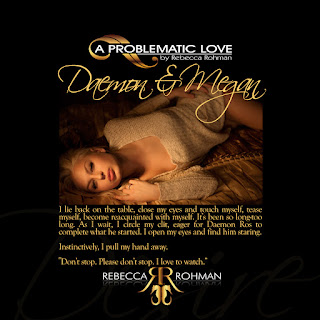 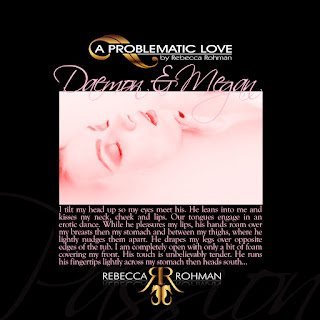 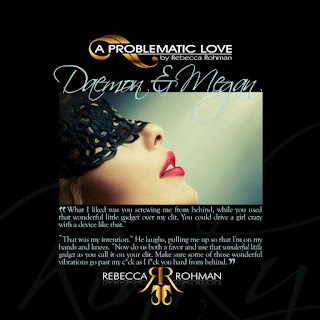 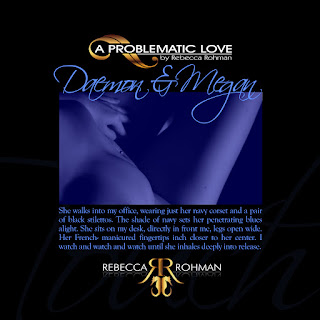 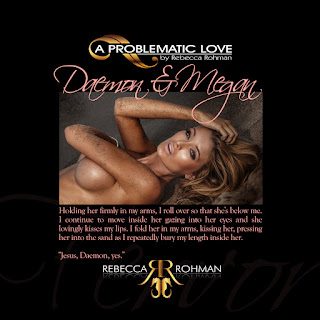 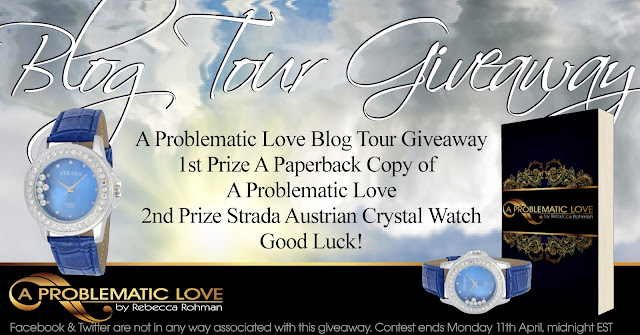 
Rebecca Rohman is a wife and designer currently living in the northeastern United States. She was a sales manager for a tourist magazine, and for many years prior, she was involved in marketing for a jewelry company and fine wine distributor.

About fifteen years ago, she started writing her first romance novel purely to entertain herself. In early 2012, she decided to complete and release it. Since then, she has released three additional novels. A Problematic Love is her fourth release.