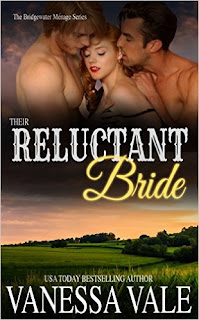 Synopsis:
Emily Woodhouse is a penniless, homeless widow thanks to her recently decea
sed husband. His gambling ways have placed her in a desperate situation. Faced with working off his debt in the basest of ways, she chooses instead to accept Tyler and Xander's unconventional marriage proposal. She won't be marrying one man, but two.

Tyler and Xander know instantly that Emily is the one for them. Not only does the widowed young woman rouse their protective natures, she knows of their customs regarding a two husband marriage. Despite the fact that Emily needs the safety they can offer, she isn't eager to remarry. She might be reluctant, but they will show her what it will be like with two men to cherish, protect and possess her.

But the past catches up with them in the most dangerous of ways. Only in facing the past can they forge a future together.

Xander looked at me for one short moment, then lowered himself to his knees and began lifting up the long hem of my dress.
I tried to swat his hands away, but he was not to be deterred.
“What are you doing?” I squeaked. It was one thing to agree to marry and… fuck them, but it was another to do it right now.
“I’m going to show you how it’s going to be between us,”
“Yes, but why are you on your knees? Shouldn’t we be in bed? It’s not dark out,” I stammered, my palms pressing against the wood of the door.
He looked up at me and grinned. His teeth were white compared to his tanned skin and dark beard.
“You are a little reluctant after all.”
All of a sudden I was very reluctant.
“Don’t worry, baby, he’s going to make you feel good,” Mr. Tyler said, his voice a smooth timbre. He moved closer. Backed against the door, one man at my feet and the other just beside me, I had nowhere to go.

Excerpt (SFW version):
You need a wife and Emily is perfect.”
“She’s just lost her husband. How could she be perfect if she’s clearly not interested?” I angled my head toward the direction she’d gone.
“Her husband gambled and drank to excess. While she never once confessed it, I believe he hit her. He was cruel to her at the very least. She is not the least bit sorry he’s dead. In fact, if she weren’t such a nice person, she’d be dancing on his grave.”
The idea of anyone hurting Mrs. Woodhouse made my hands clench. She was too small, too… dainty—even with her lush curves—to protect herself from the likes of a man Olivia described.
“Then she can find a man she truly likes this time around. She’s young, beautiful. She’s a catch for any man in town.”
Olivia grinned. “So you think she’s beautiful?”
“Any conscious man would think so,” I countered.
“Then you should offer for her.”
I sighed, exasperated. “Why?”
“Because you and Xander need a wife.”
I shook my head. “We do not need a wife.”
“I see the way you look at the couples at Bridgewater. Everyone’s happily married. It’s hard, I’m sure, for you to witness since no one else marries like we do. Like your parents. You want a marriage with Xander like all of us at Bridgewater. Admit it.”
“Of course I admit it. I won’t marry any other way.” I put my hand up. “That does not mean that our bride should be Mrs. Woodhouse.”
Olivia pursed her lips. “She has to marry.”
My brows went up. “Again, why?”
“The bank is taking the ranch. Debts, most of them I’m sure are because of her husband’s gambling. She has no place to go. No money. She’ll have to get a job and there are none, unless she wants to work on her back.”
“Olivia,” I warned.
“What? It’s true.” Olivia took a deep breath. “She’s going to have to marry. A woman doesn’t have any other options. It might as well be you.”
I frowned. “Is that a compliment?”
“Of course, it is. She deserves someone—or two someones—who will be good to her. I know you and Xander would be. Plus, I know her well and she knows about how we marry. I like her. Trust me, you’ll be well suited.”
I turned so I could look at the woman’s retreating figure. Well suited? I had no doubt we’d be very compatible in bed. She would be no hardship to look at. That did not make a marriage, but it certainly helped.

Who doesn't love the romance of the old West? Vanessa Vale takes the sensual appeal of rugged cowboys a step further with her bestselling books set in the Montana Territory. They are much more than just sexy historical westerns. They're deliciously naughty reads that sometimes push the boundaries of fantasy. It's pure escapism with quite a few very hot, very alpha cowboys.

When she's not writing, Vanessa savors the insanity of raising two boys, is figuring out how many meals she can make with a pressure cooker, and teaches a pretty mean karate class. She considers herself to be remarkably normal, exceedingly introverted and fairly vanilla, which does not explain her steamy stories and her fascination with cowboys, preferably more than one at a time.

She lives in the Wild Wild West where there's an endless source of 'research' material.