Claimed is book 3 in the Death Dealers MC series and is the conclusion of Gage and Raven's story. Books 1 and 2 - Forbidden and Tempted, must be read first.

**Raven**
I’m broken. Damaged goods. I was violated in the vilest way possible and I’ll never be the same. He’ll never claim me now. Why would he even still want me? Why would anyone? I don’t have what he wants anymore. I’m not even the same girl he met. He’ll leave me just like everyone else in my life. I don’t want him to go. He’s all I have.

**Gage**
I should have protected her and I didn’t. Everything that happened is my fault and if she wants nothing to do with me I wouldn’t blame her. I know I should have stayed away from her but I was selfish. I still am. I’ll move Heaven, Hell, and everything in between in order to make things right. I don’t want to lose her. I can’t. She’s mine.

If you read Tempted, then you know what happened at the end. How will Gage/Reaper handle it? 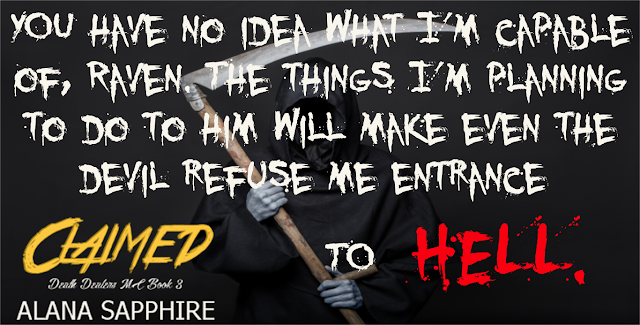