Love. It’s my name. It’s what I fight for. It’s Frankie. I’m a fighter. Trained to always keep my cover. To anticipate, see the next hit coming. I never expected her past to come at us swinging like it has. I’m about to take on two of the most important fights of my life. My girl and the belt. I know that I can handle it. That I’ll never stop fighting. But, what do you do when your life, your love is threatened and you can't take the hits – she has to? You shut your eyes and fucking pray like hell that she’s strong enough, fierce enough to come out on top. I went to war for her. Now it's her turn.

Oh me gee, I can't even describe how excited I was to read this book. Literally I had it marked on my calendar. We leave Love Hurts with a major cliffhanger. Which I seem to love for some reason, but just the same I can see why she did it. It would have been a 600 page book if she kept going.

In Love Burns we see a side of Frankie and Deacon we didn't think we'd see. Frankie who's become a fighter. To fight for the man she loves, and Deacon who's known all along that Frankie was made for him. They go through so much, the good, the bad, and the really freaking ugly. At one point I wasn't sure if they were going to give up and call it quits.

Deacon pulling his head out the cage to see what communication really is and not just all about the make up part. Not saying there wasn't hot sex because, goodnight is it a scorcher. Im giving this 5 stars, really I think its more than even that though! 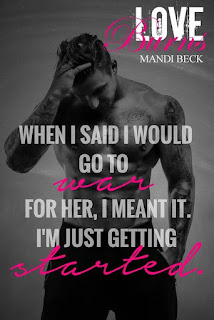 Mandi Beck has been an avid reader all of her life. A deep love for books always had her jotting down little stories on napkins, notebooks, and her hand. As an adult she was further submerged into the book world through book clubs and the epicness of social media. It was then that she graduated to writing her stories on her phone and then finally on a proper computer.
A nursing student, mother to two rambunctious and somewhat rotten boys, and stepmom to two great girls away at college, she shares her time with her husband in Chicago where she was born and raised. Mandi is a diehard hockey fan and blames the Blackhawks when her deadlines are not met.
Love Hurts is her debut novel and she is currently working on the next in the series along with whatever other voices are clamoring for attention in her mind.